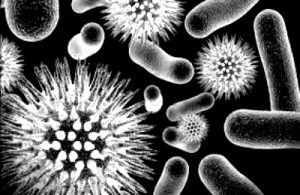 Over two thousand years ago, Hippocrates said “All disease begins in the gut.”

The father of modern medicine was way ahead of his time. While gut health is not linked to every disease (as far as we currently know), continuing research into the gut microbiota is revealing just how important the communities of bacteria that reside there are to our overall health.

Bacteria coexist with us – and some do things that help us (like make vitamins, break down waste, aid in digestion, and help plants absorb nitrogen from soil). Yes, there are bacteria that are dangerous (like the ones that cause tuberculosis, cholera, and Lyme disease), but most of the bacteria in your body is rendered harmless by your immune system.

You have trillions of cells in your body – and it is estimated that you have about the same amount of (some estimates say 10x more) microorganisms in your gut!

Research suggests that the relationship between gut flora and humans is a mutualistic, symbiotic relationship. This means that it is a mutually beneficial relationship – the microbes need us, and we need them.

The communities in our microbiome carry out a variety of functions which are vital to not only our health and well-being but our very survival.

Starting with our immune system, our microbiome establishes the parameters in which our bodies judge whether or not something is friend or foe. It maintains harmony, balance, and order amongst its own communities, ensuring that opportunistic pathogens are kept to a minimum, while also keeping the host system from attacking itself.

It is our first, second and third line of defense – starting with our skin, then our mucus membranes, and finally our gut, providing a living barrier that is able to be modified and transformed to suit individual needs and unique environments.

Our gut microbiota is fundamental to the breakdown and absorption of nutrients. Without it, the majority of our food intake would not only be indigestible, but we would not be capable of extracting the critical nutritional compounds needed to function. Our symbiotic cohorts not only provide this service, but also secrete beneficial chemicals as a natural part of their metabolic cycle.

As you can see, research into what the microbiota does for us, and how we can keep it healthy, is of utmost importance. There are so many studies being published on a regular basis that it’s hard to keep up.

Here are summaries of some recent research findings.

This study’s findings suggest that triclosan, an antimicrobial and antifungal agent found in many consumer products ranging from hand soaps to toys and even toothpaste, can rapidly disrupt bacterial communities found in the gut.

The researchers found that triclosan exposure caused rapid changes in both the diversity and composition of the microbiome in the laboratory animals. It’s not yet clear what the implications may be for human health, but scientists believe that compromising of the bacteria in the intestinal tract may contribute to the development or severity of disease.

Christopher Gaulke, lead author on the study and a postdoctoral microbiology researcher in the OSU College of Science, explains:

Clearly there may be situations where antibacterial agents are needed.

However, scientists now have evidence that intestinal bacteria may have metabolic, cardiovascular, autoimmune and neurological impacts, and concerns about overuse of these agents are valid. Cumulative impacts are also possible. We need to do significantly more evaluation of their effects, some of which might be dramatic and long lasting.

Researchers at Oregon State University and other institutions have discovered an important link between the immune system, gut bacteria and glucose metabolism – a “cross-talk” and interaction that can lead to type 2 diabetes and metabolic syndrome when not functioning correctly.

The researchers say a better understanding of these systems may lead to new probiotic approaches to diabetes and other diseases. The findings also show the  general importance of proper bacterial functions in the gut and the role of one bacteria in particular – Akkermansia muciniphila – in helping to regulate glucose metabolism.

This bacteria’s function is so important, scientists say, that it has been conserved through millions of years of evolution to perform a similar function in both mice and humans.

There’s probably more than one bacteria involved in this process of communication and metabolic control, researchers said. The gut harbors literally thousands of microbes that appear to function almost as a metabolically active organ, emphasizing the critical importance of gut bacterial health.

Dr. Natalia Shulzhenko, an assistant professor in the OSU College of Veterinary Medicine and one of the corresponding authors on this study, said of the findings:

It’s being made clear by a number of studies that our immune system, in particular, is closely linked to other metabolic functions in ways we never realized. This is still unconventional thinking, and it’s being described as a new field called immunometabolism. Through the process of evolution, mammals, including humans, have developed functional systems that communicate with each other, and microbes are an essential part of that process.

When microbes inside the digestive system don’t get the natural fiber that they rely on for food, they will rely on the natural layer of mucus that lines the gut instead – eroding it to the point where dangerous invading bacteria can infect the colon wall. Yikes!

“The lesson we’re learning from studying the interaction of fiber, gut microbes and the intestinal barrier system is that if you don’t feed them, they can eat you,” Eric Martens, Ph.D, one of the study’s lead researchers, explained.

“To make it simple, the ‘holes’ created by our microbiota while eroding the mucus serve as wide open doors for pathogenic micro-organisms to invade,” said Mahesh Desai, Ph.D, who led the research with Martens.

Martens provided a bit of advice based on the findings:

While this work was in mice, the take-home message from this work for humans amplifies everything that doctors and nutritionists have been telling us for decades: Eat a lot of fiber from diverse natural sources. Your diet directly influences your microbiota, and from there it may influence the status of your gut’s mucus layer and tendency toward disease. But it’s an open question of whether we can cure our cultural lack of fiber with something more purified and easy to ingest than a lot of broccoli.

Our gut microbiota has been linked to obesity in many studies. Mice that receive gut bacteria transplants from overweight humans are known to gain more weight than mice transplanted with gut bacteria from normal weight subjects, even when the mice are fed the same diet.

A new, larger study conducted by the National Food Institute confirmed those findings, and the researchers also investigated how the spread of bacteria between individual mice affects their digestion/metabolism.

The bacterial community in the intestine of mice with the smallest weight gain has been less capable of converting dietary fibre in the feed, which partly explains the difference in weight between the animals.

In addition, the study shows that the gut bacterial composition affects a number of other measurements, which have to do with the ability of the mice to convert carbohydrates and fats, and which affect the development of diseases such as type 2 diabetes (e.g. levels of insulin and tryglycerides). The researchers caution that it cannot be concluded that bacterial communities from the overweight children affects the mice in a specific direction in relation to the risk of developing type 2 diabetes.

Following a successful diet, many people regain the weight lost – an all-too-common phenomenon known as “recurrent” or “yo-yo” obesity. The vast majority of recurrently obese individuals not only rebound to their pre-dieting weight but also gain more weight with each dieting cycle. During each round of dieting-and-weight-regain, their proportion of body fat increases, and so does the risk of developing the manifestations of metabolic syndrome, including adult-onset diabetes, fatty liver, and other obesity-related diseases.

Researchers at the Weizmann Institute of Science found that the gut microbiome plays an important role in post-dieting weight gain, and that by altering the composition or function of the microbiome this common phenomenon may prevented or treated.

The study was performed by research teams headed by Dr. Eran Elinav of the Immunology Department and Prof. Eran Segal of the Computer Science and Applied Mathematics Department. The researchers found that after a cycle of gaining and losing weight, all the mice’s body systems fully reverted to normal – except the microbiome. For about six months after losing weight, post-obese mice retained an abnormal “obese” microbiome.

“We’ve shown in obese mice that following successful dieting and weight loss, the microbiome retains a ‘memory’ of previous obesity,” says Elinav. “This persistent microbiome accelerated the regaining of weight when the mice were put back on a high-calorie diet or ate regular food in excessive amounts.” Segal elaborates: “By conducting a detailed functional analysis of the microbiome, we’ve developed potential therapeutic approaches to alleviating its impact on weight regain.”

The findings of this study are fascinating and promising. I highly recommend reading the entire press release here.

What is Going on in Your Gut? Your Second Brain, Bacteria, and Your Health

Your Lifestyle Impacts Your Gut Bacteria – and Ultimately, Your Overall Health

Can Gluten Cause Depression?

Depression Cause May Be Physical, Not Mental

Gut: The Inside Story of Our Body’s Most Underrated Organ

Eat Dirt: Why Leaky Gut May Be the Root Cause of Your Health Problems and 5 Surprising Steps to Cure It

Brain Maker: The Power of Gut Microbes to Heal and Protect Your Brain–for Life

The Microbiome Solution: A Radical New Way to Heal Your Body from the Inside Out

Nutritional Anarchy is owned and operated by Lisa Egan and may contain advertisements, sponsored content, paid insertions, affiliate links or other forms of monetization.

Nutritional Anarchy abides by word-of-mouth marketing standards. We believe in honesty of relationship, opinion, and identity. The compensation received may influence the advertising content, topics, or posts made in this blog. That content, advertising space, or post will be clearly identified as paid or sponsored content.

Nutritional Anarchy is never directly compensated to provide opinion on products, services, websites, and various other topics. The views and opinions expressed on this website are purely those of the authors. If we claim or appear to be experts on a certain topic or product or service area, we will only endorse products or services that we believe, based on our expertise, are worthy of such endorsement. Any product claim, statistic, quote, or other representation about a product or service should be verified with the manufacturer or provider.

Nutritional Anarchy makes no representations, warranties, or assurances as to the accuracy, currency, or completeness of the content contain on this website or any sites linked to or from this site.

Have you tried CBD for pain, anxiety or depression?

Please log in again. The login page will open in a new window. After logging in you can close it and return to this page.